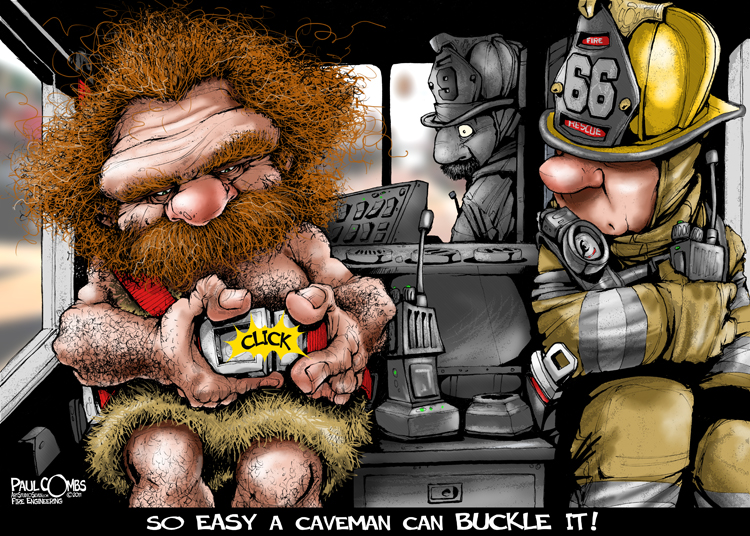 There have been numerous complaints from a small group about my latest seat belt cartoon. Enough so that Brother John Willgohs felt compelled to share his story of an apparatus accident that happened in 1998. If you can read this, and look at the attached photo without realizing the necessity for you and your crew to buckling-up, well, maybe it's time for you to permanently walk out the back bay door!! 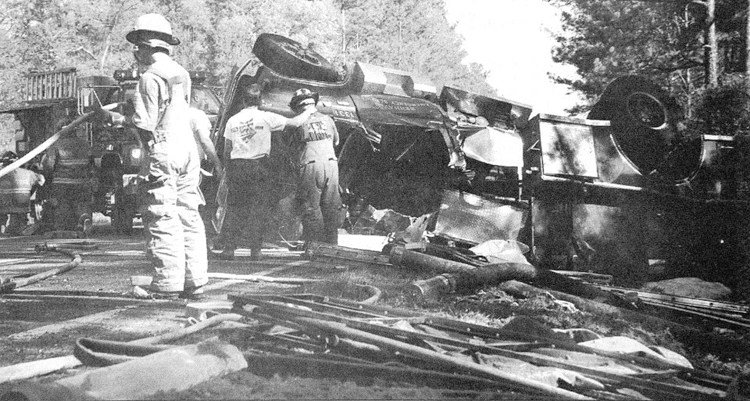 "OK, now I'm agitated. Here's a write up of what happened.

It was April of 1998. We were headed to a grass fire threatening an abandoned house. As we rounded an "S" curve, the second half of the curve turned out to be much sharper than we expected and we first found ourselves in the opposing lane.

I thank God that no one was coming the other way, school was letting out and a school bus full of children would have made the incident all the more devastating.

As the driver corrected, he over corrected and we then found ourselves off the right shoulder. He tried to pull us back onto the road but the right rear tire dug into the mud. I remember looking in the rear view mirror and thinking "we're going over." As the truck rolled, another thought entered my head as the truck was upright after the first complete roll- "I hope we're done" and then, as it began to roll a second time "Nope, here we go again". We rolled 1 3/4 times coming to a rest on the left side. I exited the truck through the windshield, which was gone.

The driver was pinned under the truck. He was, quite literally, less than an inch from being fatally injured and one spark away from very serious, if not fatal, burns from the gasoline he was laying in. The gas tank was above him and leaking. I will never forget, when he asked what was on top of him, my response- "The truck. The truck is on top of you."
I was completely helpless. Our radio didn't work, the antenna was gone, so I couldn't call for help. A resident had heard the crash and came out of her house. I told her to call 911 and get help. What was, I'm sure just minutes, seemed like an eternity before anybody else arrived.

We took our entire department out of service for several hours. Someone else had to fight our fire that day. We took vital resources away from the rest of the county and a life flight helicopter away from the state. And his injuries were much worse than what they would have been had he been belted in.

I've been there! I've been with the fire service since 1988, I've gotten caught by my seatbelt as I'm trying to get bunkered up! But I'm alive too! I make every attempt to be dressed out for a fire before I get into the truck.
My brother Paul works tirelessly on artwork to raise awareness to this, among several other issues, in such a way that, many times, makes us smile. Some other brothers, like my good friend Mike Wilbur and Tom Shands work hand in hand with the NFPA and the truck manufacturers to FIX the problems and make passenger restraint systems more user friendly.

Are you going to let their work be wasted because you're hard headed and stubborn?

It's been almost 14 years. I remember it like it was yesterday. I still get tears in my eyes when I talk about it. It was the only time since I was six that I considered not being a part of the fire service. It only takes a moment to buckle up. Do it." John Willgohs, Bernalillo County Firefighter

I want to personally thank John for sharing his story. Learn from this folks and share the word!!