Misapplication of the Trench Cut The classic trench cut shown to the left has not changed by definition only by misapplication. The trench cut was developed during the 1960’s in New York city during an exceptionally busy fire era. The trench component of the trench cut is to create a fire break and provide access for fire streams not to ventilate the cockloft.The tactic was brought outside the city when the first edition of John Norman’s Fire Officers Handbook was published.

I can think of at least a handful of fires at our department where these two tactics have been misunderstood, misapplied and in the end been either entirely ineffective or drawn fire and compounded problems. I hope this brief review can help clear some things up. 3. Cut trench at narrow point and pull ceiling but do not pull trench.

4. Position hose lines underneath and above

5.When fire shows from observation cuts indicating spread to the trench. Open the trench and operate hoselines.


This picture and points come directly from the Norman text. It outlines the requirements for a trench cut operation. Note that the first order of business is a large vent h*** over the fire area. The main vent over the fire area may be burn through or a h*** cut by firefighters. Observation cuts are placed between the main h*** and the trench to provide indication of fire travel . Lastly, we have the trench cut as the fire break in an area which hose lines can be safely staffed and operated. The trench cut is not to be opened until the observation cuts are indicating the fire has overwhelmed the main vent and is moving towards the trench. In these situations with the common cockloft, early opening of the trench will potentially draw fire. Since the tactic is primarily used in tenements of H or E type construction that provided "choke points" the next question usually comes up. Since we don’t have H or E type tenement buildings when would we use trench cuts? Any type of flat roof on a “winged” building will work however the most common application in most suburban departments is limiting extension in strip-malls. This would be an example of set-up for a center unit Keep in mind with the lack of a narrow point this becomes extremely manpower intesive and time consuming.

Trench Cuts are not a Peaked Roof Tactic 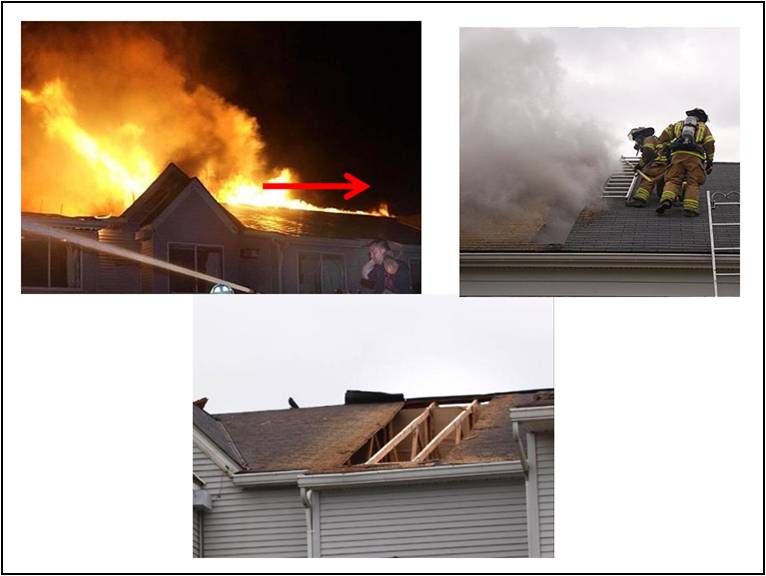 In the top left picture we can see fire burning through the ridge with nothing showing at the eaves. This is a great picture to demonstrate the funnel or heat trap effect of peaked roofs and how it accelerates horizontal fire spread at the ridge. Keep this in mind that fire spread through the peaked roof is not consistent. Fire will travel the entire space at the ridge long before lower points in the field become involved.

On the bottom we see the “trench cut” crews created in the roof to prevent fire spread. Knowing what we know about peaked roofs and seeing the picture on the left it should be clear that the further we get from the ridge when venting attic spaces more time and energy is being wasted.

The firefighters operating on the right have made a lot of cuts however their ventilation opening is very narrow overall. Based on fire behavior and building construction we know that the ridge will be hit the hardest and fastest by fire spread. A narrow opening like this at the high point will be quickly overrun. 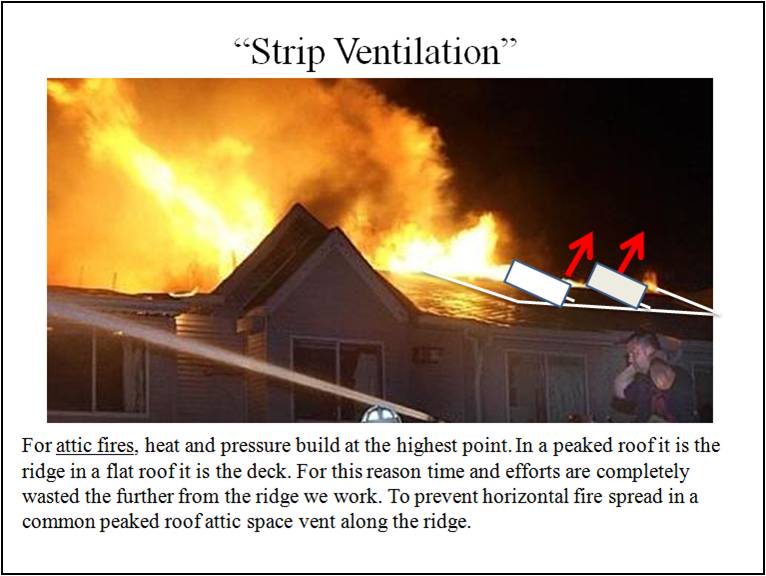 When we encounter fire in the attic of a peaked roof occupancy and fire spread is the main concern the most appropriate tactic and efficient use of resources is a strip vent . Put firefighters on the ridge at a point you have determined you want to stop fire travel. This point should be far enough from current fire location that the tactic can be completed but not at a point that you will draw fire to a location you are trying to salvage. Open up along the ridge with an appropriate sized h*** for the volume of the attic space. This may end up being 4x12 in occupancies like the hotel above. 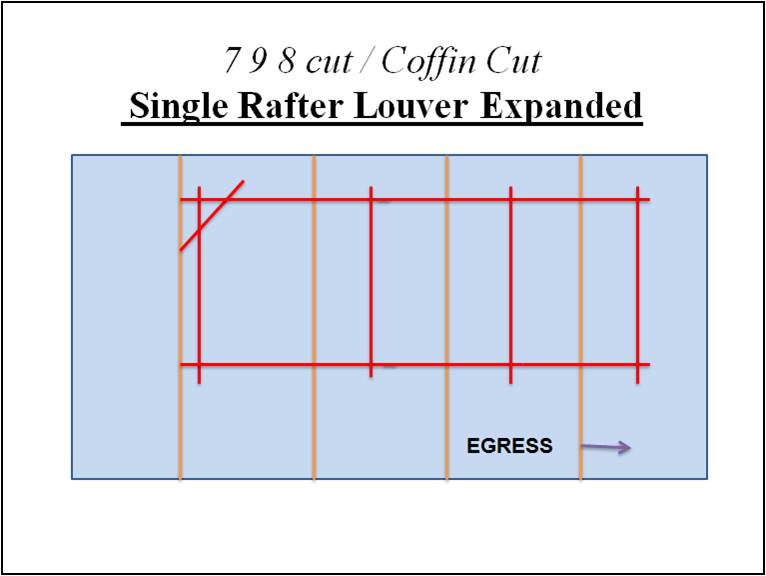 While the "7,9,8" or "Coffin" cuts are typically associated with flat roofs they work great in peaked roof strip ventilation because of the louver and vent cut process that is easily expanded to meet the situation. By making a large opening at the high point the fire/heat/smoke traveling along the ridge will be released up and out this opening killing the horizontal momentum and stopping fire spread.

There is certainly more to this topic than is addressed in this short post. I know that misapplication of the trench cut on peaked roofs has occurred at our department and from pictures I have seen from around the country this confusion is not isolated. Do not force a tactic to fit. If we consider our goal (to stop fire spread) and take into consideration fire behavior and building construction the appropriate tactic will be clear. 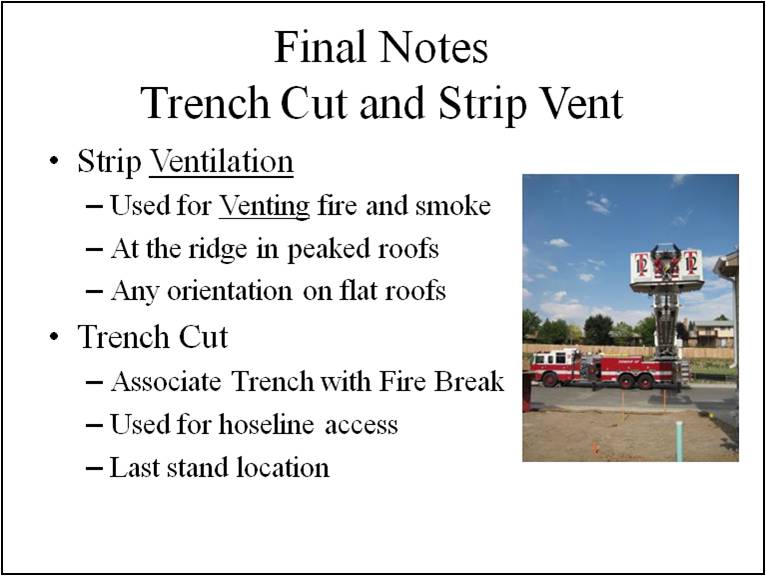 Comment by Wayne Benner Jr on April 17, 2011 at 7:26pm
Brian keep up the great work, very nice article and I will borrow it for sure.

Thanks for the feedback and for putting numbers with the fact that without that choke point this is a serious/impossible undertaking. Sounds like we agree that the trench cut as a tactic demands more attention and education. How it is being used today across the country is not how it was designed. In an attempt to keep the post to the attention span of a firefighter I certainly left a lot out. Hopefully we get more posts from guys like you with more experience and understanding on trench cuts so we can stop wasting time and undue risk from trench cut misconceptions/orders.

-Most firefighters today do not understand that for a correctly applied Trench Cut to work properly, the building must offer a choke point, as seen in the first photo. This is a very specialized tactic that was designed for buildings that have areas where the building narrows and the trech will therefor be effective.

-Today everyone wants to do a trench on strip malls/tax payer fires. This is emphatically incorrect. The trench technique requires a narrowing portion so that the cut can be made from exterior wall to exterior wall, while the strip mall offers no choke point.

-Consider that even a 50' deep strip mall will require over 125 of linear cutting at a minimum if the trench cut is made properly. Most departments in this country do not have enough manpower or saws available on such a scene so as to perform a manpower intensive tactic like a trench cut and do it safely and expediently enough so as to make a definitive difference.

-Neither does the strip mall construction method lend itself to safe roof operations, especially if the fire conditions are such that a trench cut is being considered.

-The trench cut is a highly specialized tactic for a very unique building type and implementing a trench cut should be only under such circumstances.