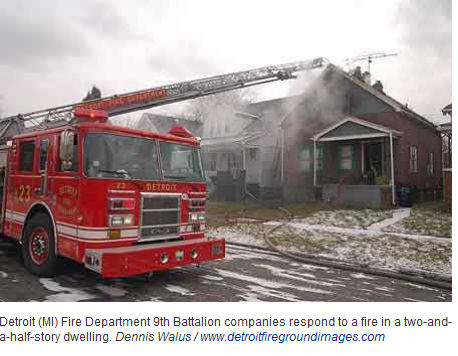 I don't think most departments use aerials enough for "normal" operations. Here is a straight stick, spotted correctly and used for climbing for the vertical vent crew.
Why do I think that's best?
You don't have to butt the ladder. That leaves another firefighter to work.
Chances of the aerial tipping, sliding, falling etc. is slim. Old aerials with screw jack were not as stable. Newer aerials are much more stable.
A good experienced driver can get the aerial up to the roof faster than a crew can raise a 28 footer.

Most truckies complain because they can't use their stuff because the engines block their access to the front of the house.
Most engine guys complain when the truckies take stuff off their engine because the truck couldn't get close enough to the fire to use "their" stuff.

Stop the madness and let trucks have a spot - a good spot - in front of the building and then use the aerial.
What-ch-think?