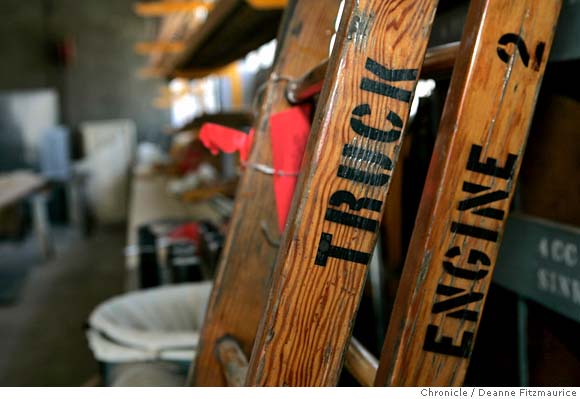 With the skilled hands of a craftsman, Qing Du feels the side rail of a San Francisco Fire Department ladder, searching for stress points.

In a tradition that dates back to World War I, Du custom builds and restores the 350 wooden ladders used by San Francisco firefighters in a city fabrication shop in the Bayview district.
San Francisco is one of a handful of fire departments nationwide, including those in Oakland, Hayward, Alameda County and San Mateo, that still use wooden ladders. But it is the only one that relies on city workers to handcraft each one.
The rest buy their wooden ladders from Alaco Ladder Company in Chino (San Bernardino County), the only U.S. outfit that still sells them.

Du finds the crack he's looking for, decides the rail needs replacing and pulls the ladder apart. With a mallet, he bangs on the second rail and the rungs pop into the air like bread out of a toaster.
Like the cable cars or the clam chowder served in sourdough bowls at Fisherman's Wharf, custom building the city's wooden fire ladders is part of San Francisco tradition. It is kept alive out of one part necessity and two parts love.

Firefighters in cities with many high-voltage overhead wires -- including those that power Muni lines in San Francisco -- prefer wood ladders because they don't conduct electricity like aluminum or wet fiberglass ladders do.
Wood is twice as expensive -- about $100 per foot -- and about 15 percent heavier than aluminum or fiberglass, but it holds up better in a fire, said Mike Braun, supervisor of San Francisco's Fire Shop.
"Aluminum or fiberglass, when it gets too hot, it gets soft; it will actually fold over without any warning," he said. "Wood takes hours to fail completely -- enough time for a firefighter to see it burning and get off it."

San Francisco has stayed with wood, said Capt. Jerry Cohane, because the ladders are sturdier and last longer, and builders like Du save the city money because they know how to get the longest life out of a ladder. Once an aluminum or fiberglass ladder cracks, it usually has to be replaced. Wooden ones can always be repaired, he said.
"You don't want to use a 50-foot lightweight aluminum ladder in heavy winds -- it's too dangerous," Cohane said.

Many of San Francisco's fire ladders look like antiques because they are. Some date back to 1919 and are perfectly restored and in use today. A dusty linen-bound log book in the Bayview shop with quill-pen entries keeps track of each ladder's history.
"You can't get craftsmanship like that anymore," Cohane said. "Our ladders are just built better."
The three artisans who make the ladders for San Francisco have been doing their job for a combined 50 years.
They make regular trips to the mill to handpick only the strongest ash, Douglas fir and hickory woods with tight, straight grain from the center of the tree. Anything with wavy grain or knots is rejected. The wood stays in the San Francisco shop for three years to acclimate so that it doesn't warp or crack when it's fashioned into a ladder.
The crew makes about 35 new ladders a year and repairs hundreds.
They have never had a ladder fail on a firefighter, Braun said. The most common reason a ladder goes into the shop is because it's worn from too much use. Du and his colleague Jerry Lee also repair a lot of cracks. It's not uncommon for firefighters to bring in a ladder they accidentally ran over with their truck.

All of it is fixable, Du said.
Du and Jerry Lee will grind larger rungs from a broken ladder into smaller ones to reuse them, and salvage rails from one ladder to make a shorter one.
They are also pattern makers, drawing the plans and casting the molds to make hardware such as the locking mechanisms, recessed nuts and fittings that hold the ladders together.
"I have to be very careful, or a firefighter could get hurt," said Du, who learned his skills fabricating engine blocks at his family's factory in China. He has been making ladders for 14 years.
The largest ladder they make is 50 feet, weighs 350 pounds and takes six firefighters to lift.
Painter Pete Misthos varnishes the ladders until they're glossy enough to see his reflection.
Misthos takes as much care with the ladders as he does with his other projects -- refinishing the beloved Doggie Diner heads, custom-painting motorcycles or creating a heart sculpture for the 2004 Hearts in San Francisco installation.
"There's a certain amount of pride working on these ladders," said Misthos.
Visitors to his finishing room are likely to leave with a bit of an epoxy high and a dose of wisdom.
Misthos likes to write inspirational quotes in black Sharpie pen on his metal tool cabinet. In the decade he's been working in on the ladders, he amassed quite a collection of quips from Shakespeare, Martin Luther King, unknown sources and this gem from "Rocky and Bullwinkle": "Boiling water that softens the hard carrot also hardens the soft egg."
Firefighters who visit him often thank him for his quality work, he said, and sometimes they even try to persuade Misthos to refinish a piece of their furniture.
"We try to instill quality and craftsmanship, and that gets passed on to the firefighters so they take pride in and good care of the ladders," he said.
Although wood fire ladders may seem to be going the way of the typewriter, Alaco Ladder Co.'s manufacturing manager, Pedro Jimenez, says he is seeing the opposite. Annual sales of new wooden ladders have doubled in the past five years to about 1,100, he said.
"Although aluminum is cheaper, I think fire departments are realizing wood can be better in the long run," he said.
A wood renaissance would tickle Braun's heart, but he's more concerned with local matters. San Francisco's Fire Shop has no apprentices, and no one is knocking on the door looking to build wooden ladders.
"We are like a ghost down here," he said. "This is hundreds of years of history. Who is going to keep it going after my crew is gone?"
________________________________________
Wooden fire ladders
Thirteen fire departments in the United States use wooden ladders, 12 of them in California. They are:
-- San Francisco -- Oakland -- Hayward -- Alameda County -- San Mateo -- Los Angeles -- Los Angeles County -- Glendale (Los Angeles County) -- Pasadena -- West Covina (Los Angeles County) -- Montebello (Los Angeles County)
-- Arcadia (Los Angeles County) -- Bellevue, Washington
Source: Alaco Ladder Co., Chino