For almost 80 years, the Long Island General Supply store has been a fixture in the Long Island City section of Queens serving local contractors and residents with all of their hardware needs. Unfortunately, that included propane tanks and other flammable liquids.

Father's Day, Sunday, June 17, 2001. The relative calm was broken at 2:19PM with a phone call to the Queens central office reporting a fire at 12-22 Astoria Blvd. Units arrived within 5 minutes and gave the signal for a working fire. Fire fighters were making good progress but at 2:48PM something went terribly wrong.

Witnesses on the scene report hearing a small explosion followed by a huge blast. The shock wave from the blast blew down every fire fighter on the street and knocked down the exposure 1 wall onto the sidewalk, right on top of fire fighters venting the building.

As members started sifting through the rubble, the chief ordered a second alarm followed almost immediately by a fourth alarm when a radio transmission was received from FF Brian Fahey from Rescue 4. He was in the basement under tons of collapsed material.

"I'm trapped in the basement by the stairs. Come get me." This was a battle cry to everyone on the scene. Every capable member frantically began removing debris to try and get to Brian and the others. The chief ordered more help. Numerous special calls were made.

There were 144 pieces of apparatus at the scene: 46 engines, 33 ladders, 16 battalion chiefs, 2 deputy chiefs, all 5 rescues, 7 squads, and many more. In fact, with the exception of the fire boats, the JFK hose wagon, the Decon unit, and the thawing units, every type of special unit was at the scene.

Even with the vast resources of the Department, the task took several hours. The members that were on the sidewalk were quickly recovered. Fire fighters Harry Ford (R4) and John Downing (L163) were removed in traumatic arrest and brought to Elmhurst Hospital. They were buried too long, their injuries too severe. Alas, there was nothing doctors could do.

Back at the scene members still were trying to get to Brian while others were trying to put out the smoky fire. The battle went through the afternoon and into the evening. The fire was being fueled by some of the flammables in the building. After about 4 hours they finally reached the basement, but again, it was too late. A glassy eyed Mayor Giuliani said, "I can't think of a more tragic Father's Day."

Thousands of fire fighters from all over North America showed up at the funerals while fire marshals scoured the building looking for an explanation. What exactly exploded? And what was the trigger event?

In time the truth came out. Two local kids were in the rear yard of the building when unbeknownst to them they knocked over a can of gasoline. The gasoline ran under the rear door, into the basement eventually finding the water heater. When the water heater kicked in, it ignited the gasoline. As fire fighters began working in the building the fire caused the explosion of a large propane tank illegally stored in the basement. The resulting blast leveled the building and caused what will be forever known as the worst Father's Day in FDNY's history. (From www.fdnewyork.com)

Go to http://stevespak.com/fathersday.html for more information and photos.

Good reminder. I printed this out from stevespak today and shared it with the rest of the shift this morning. We seem to get complacent around holidays when we are sharing good times with family and friends and forget that Not Everyone Goes Home some shifts. 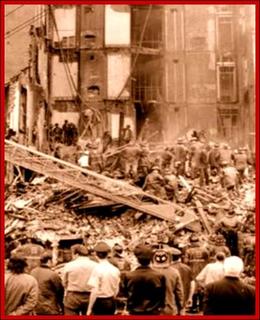 Thanks Chief for the rememberance...

A memorial was built to honor the nine fire fighters who lost their lives, and was dedicated on June 17th 1997. The memorial is a low wall constructed of black granite, and is draped with a bronze fire fighter helmet and coat. A bench rests in front of the memorial, where one can read the inscribed names of the honored fire fighters, and also view the Vendome Hotel building across the street.