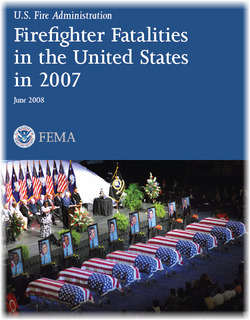 During calendar year 2007, there were 118 firefighters who lost their lives while on duty across the United States.

The unique and specific objective of Firefighter Fatalities in the United States is to identify all on-duty firefighter fatalities that occurred in the United States and its protectorates, and to present in summary narrative form the circumstances surrounding each occurrence. In addition to the 2007 overall findings, this study includes information on the hazards to firefighters presented by the lack of seatbelt use. In 2007, 27 firefighter fatalities resulted from vehicle-related incidents. In 19 of the 27 incidents where seatbelt status was known, 11 firefighters were confirmed as not wearing seatbelts at the time of the event.

For the past 22 years, the USFA has tracked all firefighter fatalities and conducted the necessary analysis for the benefit of the fire service. Through the collection of information on the causes of firefighter deaths, the USFA is able to focus on specific problems and direct future efforts towards finding solutions to reduce the number of firefighter fatalities in the future. This information is also used by many organizations to measure the effectiveness of their current efforts directed toward firefighter health and safety.