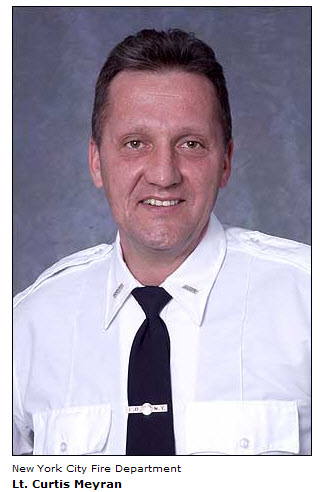 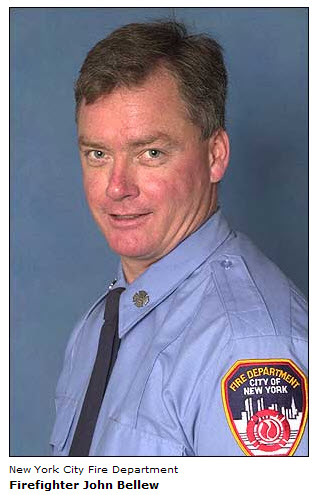 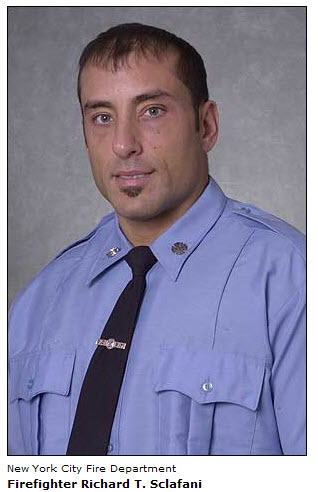 Remembering FDNY Black Sunday…LODD 2005 Take the time to read both NIOSH reports and remember the sacrafice...

Three veteran FDNY firefighters died in the LODD in Brooklyn, New York and the Bronx on Sunday January 23, 2005, a day that has become known as “Black Sunday” and called one of the saddest in fire department history.

Two firefighters were killed and four others were badly hurt when they were forced to jump from a fourth-floor window of a burning building in the Bronx. Later, a third firefighter died after tackling a basement blaze in Brooklyn.

Lt. Curtis Meyran, 46, of Battalion 26, and Firefighter John Bellew, 37, of Ladder 27, died after battling the Bronx blaze on East 178th Street in the Morris Heights section. Three firefighters were in critical condition at St. Barnabas, and a fourth was in serious condition at Jacobi Medical Center. Six Bronx firefighters became trapped in the building while searching for people on the fourth floor. When the fire from the third floor broke through to the fourth, they were faced with a horrifying choice. They jumped out a fourth-floor window, knowing that they would be critically injured.

Firefighters Jeffrey Cool, Joseph DiBernardo, Eugene Stolowski, and Cawley were badly hurt in the Bronx fire. They were trapped on the fifth floor and were left with the life-or-death choice of leaping 50 feet or burning up.

The Brooklyn firefighter, Richard Sclafani, 37, died at a hospital after being injured at a two-alarm fire in the East New York section.

Discussion: It is department policy to initiate an aggressive interior attack (offensive strategy) whenever possible. Fire departments should ensure that a hoseline is in position prior to entering hazardous or potentially hazardous areas. At this point, the hoseline can be charged and entry made. If the hoseline doesn’t charge or flow is restricted, fire fighters will still have time and space to escape.

According to Dunn, the most important fire fighting operation at a structure fire is stretching the first attack hoseline to the fire. A properly positioned and functional fire attack line saves the most lives during a fire.“It confines the fire and reduces property damage. Searches will proceed quickly, rescues will be accomplished under less threat, sufficient personnel will be available for laddering, ventilation will be effective, and overhaul above the fire room will be unimpeded.”

Firefighters should continually train on SOPs including but not limited to establishing effective water supply, proper hose deployment, and advancing and operating hoselines to ensure successful interior attacks. Refresher training should be provided to all fire fighters on a regular basis or as needed to ensure effective fire fighting skills are maintained.

Recommendation #2: Fire departments should ensure that fire fighters are trained on the hazards of operating on the floor above the fire without a charged hoseline and follow associated standard operating procedures (SOPs).

Discussion: The most dangerous location on the fire ground is operating above the fire, especially during operations without the protection of a hoseline. Before operating above a fire, it is a good practice to deploy a hoseline. Where there is risk of extension to concealed spaces, additional precautionary hoselines are needed. According to Dunn, fire fighters are most often trapped on a floor above a fire because they fail to size-up the fire below them.3 Fire fighters should make certain that they take all necessary precautions and size-up the fire before making entry above it. Fire fighters should determine whether suppression teams are capable of extinguishing the fire and notify command. If not, then command should not permit fire fighters above the fire until conditions change. In this incident, operations continued above the fire on the 4th floor after the withdrawal of Engine 75’s hoseline.

Discussion: Frequent progress reports to the IC are essential in the continuous size-up and assessment of an incident. Interior crews working in areas not visible to the IC are the IC’s eyes and ears during an incident. Progress reports also provide everyone on the fireground with information on aspects of the incident that relate to their activities (primary search, suppression, ventilation, etc.).

Recommendation #4: Fire departments should ensure that team continuity is maintained during interior operations.

Discussion: Fire fighters should always work and remain in teams whenever they are operating inside a burning structure. Team continuity means knowing your team members and who is the team leader, staying within visual contact at all times (if visibility is low, teams must stay within touch or voice distance of each other), communicating needs and observations to the team leader, staging as a team, and watching out for other team members. Teams that enter burning structures should enter and leave together to ensure that team continuity is maintained. Working in teams and maintaining team continuity provides an added safety net of fellow team members.

Discussion: Incident commanders have to address multiple tasks simultaneously during high stress activities.Incident commanders can only manage so much information and should divide up functions to make the span of control more manageable. During complex events, the IC should assign other personnel to functions such as accountability, radio communications, incident safety, company tracking, and resident evacuation in order for the IC to effectively focus on fire command.

Recommendation #6: Fire departments should ensure that Mayday transmissions are prioritized and fire fighters are trained on initiating Mayday radio transmissions immediately when they become trapped inside a structure.

Discussion: In this incident, there was an initial delay in determining who made the initial Mayday transmission. The incident commander must monitor and prioritize every message, but only respond to those that are critical during a period of heavy communications on the fire ground. A radio transmission reporting a trapped firefighter is the highest priority transmission that command can receive. Mayday transmissions must always be acknowledged and immediate action must be taken.

As soon as fire fighters become lost or disoriented, trapped or unsuccessful at finding their way out of the interior of structural fire, they must initiate emergency radio transmissions.6, 9 They should manually activate their personal alarm safety system (PASS) device and announce "Mayday-Mayday" over the radio. A Mayday call will receive the highest communications priority from dispatch, the IC, and all other units. The sooner the IC is notified and a RIT is activated, the greater the chance of the fire fighter being rescued. A transmission of the Mayday situation should be followed by the fire fighter providing his last known location. A crew member who initiates a Mayday call for another person should quickly try to communicate with the missing member via radio and, if unsuccessful, initiate a Mayday providing relevant information.

Discussion: Fire departments should develop SOPs to protect firefighters, including using defensive tactics if necessary, during incidents when high wind affects fire conditions. According to Dunn, “when the exterior wind velocity is in excess of 30 miles per hour, the chances of a conflagration are great; however, against such forceful winds the chances of successfully advancing an initial hoseline attack on the structure are diminished. The firefighter won’t be able to make forward hoseline progress because the flame and heat under the wind’s additional force will blow into the path of advancement.” The wind at the time of the incident was gusting up to 45 miles per hour, blowing from the northwest, speeding the fire extension to the 4th floor.

Fire fighters encountering high wind conditions should change their strategy. According to Dunn, “the interior line should be withdrawn and the door to the fire area closed. The officer in command must be notified of the inability to advance the interior attack hoseline due to the strong wind. A second hoseline should be advanced on the fire from the opposite end, the window or door through which the wind is blowing. This method may require the firefighters to stretch the line up an aerial ladder, fire escape or portable ladder. The second attack line will advance on the fire from the upwind side.”

Recommendation #8: Fire departments should provide fire fighters with the appropriate safety equipment, such as escape ropes, and associated training in jurisdictions where high-rise fires are likely.

Discussion: According to NFPA 1500 Standard on Fire Department Occupational Safety and Health Programs, 2007 Edition, Section 7.1.1, “the fire department shall provide each member with appropriate protective clothing and protective equipment to provide protection from the hazards to which the member is or is likely be exposed.”10 In this incident, aerials and ground ladders were unable to access the rear of the apartment. When fire fighters are beyond the reach of ladders, aerials, or elevated platforms, an option of last resort is a rope rescue. NFPA 1500, Section 7.16 Life Safety Rope and System Components states “all life safety ropes, harnesses, and hardware used by fire departments shall meet the applicable requirements of NFPA 1983, Standard on Life Safety Rope and Equipment for Emergency Services.” NFPA 1983 specifies the minimum design, performance, testing, and certification requirements for life safety rope, water rescue throwlines, life safety harnesses, belts, and auxiliary equipment for emergency services personnel. Fire departments in jurisdictions where high-rise fires are likely should provide all fire fighters with escape ropes per NFPA 1983 and the appropriate training to effectively utilize their escape ropes during emergencies.

Recommendation #9: Building owners should follow current building codes for the safety of occupants and fire fighters.

Discussion: State building codes require that single room occupancies (SROs) in non-fireproof tenement buildings have automatic fire sprinklers in every hall or passage within the apartment and at least one sprinkler head in every room. This apartment building did not have sprinklers. The transformation of the 4th floor apartment into a SRO led to the construction of an interior partition wall that impeded the discovery of the fire and hindered the fire fighters’ searches. It also prevented fire fighters from reaching the rear fire escape, their secondary means of egress.