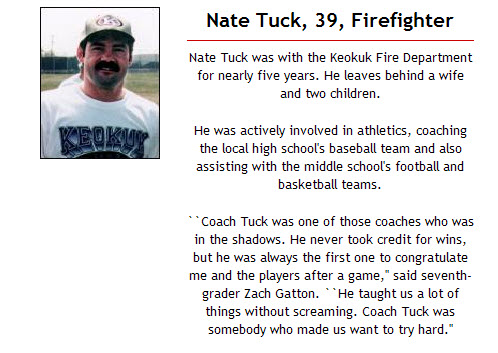 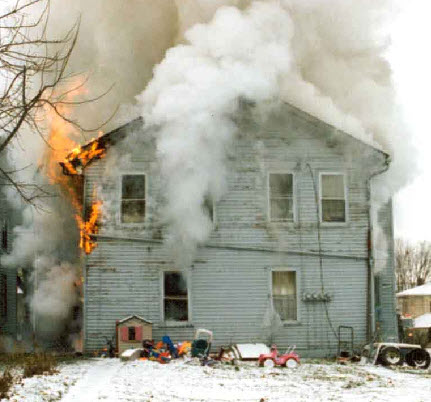 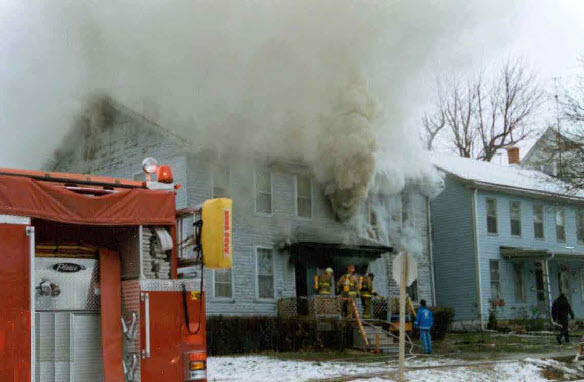 On December 22, 1999, a 49-year-old Shift Commander and two Engine Operators, 39 and 29 years of age respectively, lost their lives while performing search-and-rescue operations at a residential structure fire. Keokuk FD, Assistant Fire Chief Dave McNally, 48, Firefighter Jason Bitting, 29, and Firefighter Nate Tuck, 39 were killed while attempting the rescue of three trapped kids-who also perished. The three firefighters left eight kids of their own behind. Take time to read the reports and reflect on the job, your skills and the demands...learn from the past.

The firefighters died when a flashover occurred while the three were doing their search. The fire started in the kitchen of an old wooden two-story b/f home that had been converted into apartments. Staffing is a major issue in Keokuk, and that morning, four of the five on-duty firefighters arrived on scene and upon hearing the mother screaming that her children were trapped inside, they immediately went in after them.

The fire began on the first floor and spread rapidly, sending smoke and hot gases to the second floor trapping an adult and four children. The adult and one child were able to escape through a
second floor window. While in the process of rescuing the children still trapped, three fire fighters were caught in the rapid build-up of heat and flame and perished.

At approximately 8:24 a.m. on Wednesday, December 22, 1999, a fire was reported in a multifamily dwelling in Keokuk, Iowa. Several neighbors phoned the Keokuk 911 center to report smoke coming from a residence, and that a woman was outside screaming that there were children trapped inside. At the time the fire was reported, the on-duty force from the Keokuk Fire Department (an assistant chief, a lieutenant, and three fire fighters) was completing operations at a motor vehicle accident at a major intersection, two miles northwest of the fire scene. The dispatcher notified the units of the fire and the report of people trapped. Both units at the accident (Rescue 3 and Aerial 2) responded from the scene of the motor vehicle accident. During the response, additional calls were made to the 911 Center reporting heavy smoke coming from the house.

SUMMARY
On December 22, 1999, a 49-year-old Shift Commander (Victim #1) and two Engine Operators, 39 and 29 years of age respectively (Victim #2 and Victim #3), lost their lives while performing search-and-rescue operations at a residential structure fire.

At approximately 0823 hours, the three victims and two additional fire fighters cleared the scene of a motor-vehicle incident. One of the fire fighters (Fire Fighter #1) riding on Engine 3, joined the ambulance crew to transport an injured patient to the hospital. At approximately 0824 hours, Central Dispatch was notified of a structure fire with three children possibly trapped inside. At approximately 0825 hours, Central Dispatch notified the fire department, and a Shift Commander and an Engine Operator (Victim #1 and Victim #2 ) were dispatched to the scene in the Quint (Aerial Truck 2). At 0827 hours, Engine 3 (Lieutenant and Victim #3) responded to the scene. At 0829 hours as Aerial Truck 2 approached the scene, they radioed Central Dispatch, reporting white to dark brown smoke showing from the residence, and requested six additional fire fighters. Aerial Truck 2 arrived on the scene at 0830 hours.

The crew of Aerial Truck 2 witnessed a woman and child trapped on the porch roof, and they were informed that three children were trapped inside the house. A police officer who was already on the scene positioned a ladder to the roof and removed the woman and child as Victim #1 proceeded into the house to perform a search-and-rescue operation. Engine 3 arrived on the scene shortly after, and the Lieutenant connected a supply line to the hydrant as Victim #3 pulled the Engine into position. The Lieutenant and Victim #3 stretched a 5-inch supply line and connected it to Aerial Truck 2. At approximately 0831 hours, the Chief and Fire Fighter #1 arrived on the scene, and the Chief assumed Incident Command (IC). Fire Fighter #1 pulled a 1½-inch handline off Aerial Truck 2, through the front door and placed it in the front room. The IC instructed Victim #2 and Victim #3 to don their protective gear and proceed into the house to assist in the search-and-rescue operations. Fire Fighter #1 went back to Aerial Truck 2 to gear up.

Due to limited personnel on the fireground, the IC directed a police officer on the scene to transport him and the child to the hospital. After donning her gear, Fire Fighter #1 approached the front door and noticed that the 1½-inch handline (previously stretched) had been burned through and water was free-flowing. It is believed that the three victims were hit with a thermal blast of heat before the handline burned through.

The three victims failed to exit as 12 additional fire fighters arrived on the scene through a call-back method and began fire suppression and search-and-rescue operations. Victim #2 was located, removed, and transported to a nearby hospital, where he was pronounced dead. Victim #1 and Victim #3 were later found and pronounced dead on the scene.

NIOSH investigators concluded that to minimize the risk of similar occurrences, fire departments should;
• ensure that adequate numbers of staff are available to immediately respond to emergency incidents
• ensure that Incident Command conducts an initial size-up of the incident before initiating fire fighting efforts, and continually evaluates the risk versus gain during operations at an incident
• ensure fire fighters are trained in the tactics of defensive search
• ensure that fire command always maintains close accountability for all personnel at the fire scene
• ensure that fireground communication is present through both the use of portable radios and face-to-face communications
• ensure that a trained Rapid Intervention Team (RIT) is established and in position immediately upon arrival
• ensure that fire fighters wear and use PASS devices when involved in interior fire fighting and other hazardous duties