Forcible Entry is of one of the key areas in which truck companies must achieve proficiency. What strategies and tactics do you use to force entry? What challenges have you encountered? Share your knowledge! 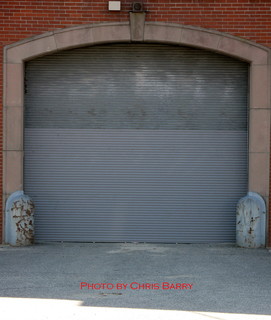 One of the commonly encountered types of doors in commercial occupancies is the overhead "roll up" door. This door may present itself as a challenge to forcible entry tactics if not prepared. As with any forcible entry evolution, carefully evaluate fire and smoke conditions prior to forcing open the door.

Initially, the forcible entry team may want to consider if forcing entry through this entrance is the best tactic. Oftentimes, you may be better suited to attack the door through which entry is most commonly made into the occupancy as this may prove to be the easiest door through which to gain access. If that is not an option, or should fireground conditions dictate, you may have to force entry through this entrance. Remember to take into account why we are forcing this door: are we forcing for entry or for ventilation and/or fire attack?

Perhaps the most commonly used method to force entry through this type of door is the inverted "V" cut. This cut allows for relatively quick access while utilizing the inverted "V" shape to maintain the structural integrity of the door.

This cut should be made close to the center of the door, and at as high a point as safely permissable by the firefighter operating the saw. The cuts should proceed in a diagonal direction downward as far as the operator can safely cut. When both cuts have been completed you have formed the inverted "V." Now, either fold the cut section either inward or outward.

The cut will be made with your rotary saw equipped with the metal cutting blade. Should you encounter a heavier gauge door, it is a good idea to have extra blades to finish the job nearby. Better yet, you may wish to have the entry team from the second-due truck (if you have that luxury) bring their saw and standby should a problem be encountered.

Once the door is forced, it may be possible to utilize standard means to open other similar doors of the occupancy. Be sure to secure any opened doors in the open position once raised, as these doors will now be loaded in the raised position. One tactic that may be used is diasbling the track with a maul or flathead axe. All raised doors that may be exposed to fire should be monitored closely for signs of impending failure even when steps have been made to secure them in the upright position.

Permalink Reply by John Mogan on March 31, 2008 at 10:07am
I saw somewhere but I do not recall where. Was out in California where they are teaching 1 cut down and sort of peeling the corrugated metal out a bit and then sliding it out. Anyone know more about this? 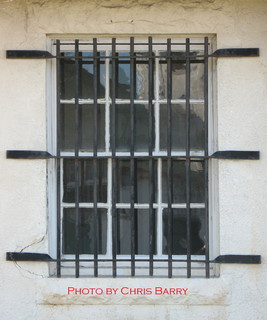 Here is an example of a window grate. What's your plan of attack to defeat this? Do you attempt to defeat the grate at its attachment points? Do you make cuts with your rotary saw with metal cutting blade? Is this an operation you and your company are proficient at performing? How quickly could you complete this evolution in a RIT/mayday situation? Thoughts and comments expected.

I encountered it during my research, but as I have not evaluated it myself, or known of anyone who has first hand experience with it, I chose not to include it here. Would love to hear from anyone who has used it. 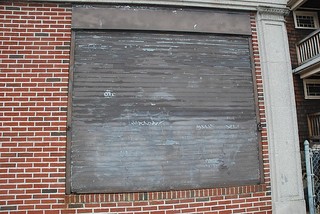 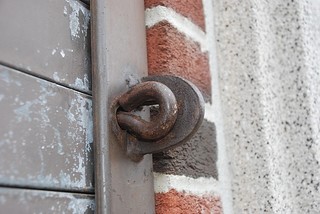 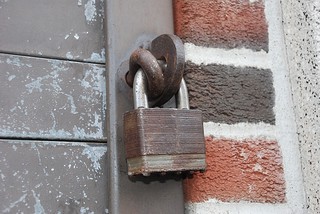 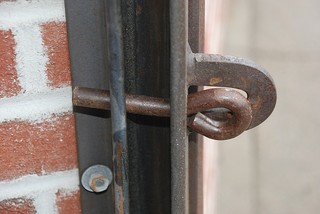 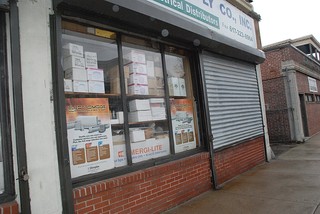 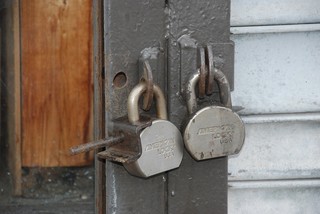 Permalink Reply by Christopher A. Barry, Sr. on April 1, 2008 at 11:04pm
Thanks to Michael Worley for taking the time to post these photos showing common roll-down doors found in many commercial retail occupancies. As the photos indicate, the types of, and level of security provided by the padlock vary widely, although it is more common to find the more substantial and therefore difficult to defeat lock shown in the photo above.

Permalink Reply by Nick Morgan on April 1, 2008 at 11:45pm
One of the challenges Truck Companies frequently face in St Louis is what I like to call "prison bars" on the front doors of residential buildings in our poorer neighborhoods. The more common approach by many companies is to get out the K-12 and cut through the lock bar to open the gate and then force entry through the normal entrance. However, this can be time consuming and very frustrating when the saw decides not to start. Also, we have some multi-apartment buildings where the security gates, or "prison bars" are placed over doors to individual apartments that are only accessible from inside the building. This presents a serious smoke and visibility problem for operating a saw. I have found that over 90 percent of the time these bars can be successfully opened with the Halligan tool much more quickly. By simply inserting the Adz end of the tool between the security gate and the door jamb, you can usually spring the security gate sufficiently enough for the lock bar to pass out of the keeper and then open the gate or bars. Sometimes with a stubborn gate, the force of the Halligan will actually cause the gate to pop loose at the hinges even if the lock bar doesn't clear the keeper. These "prison bars" are also common on exterior basement doors in St Louis, and this method usually saves a lot of time and frustration as crews prepare for the fire attack.