Hump Day SOS Where and Who Do You Get Your Information From? 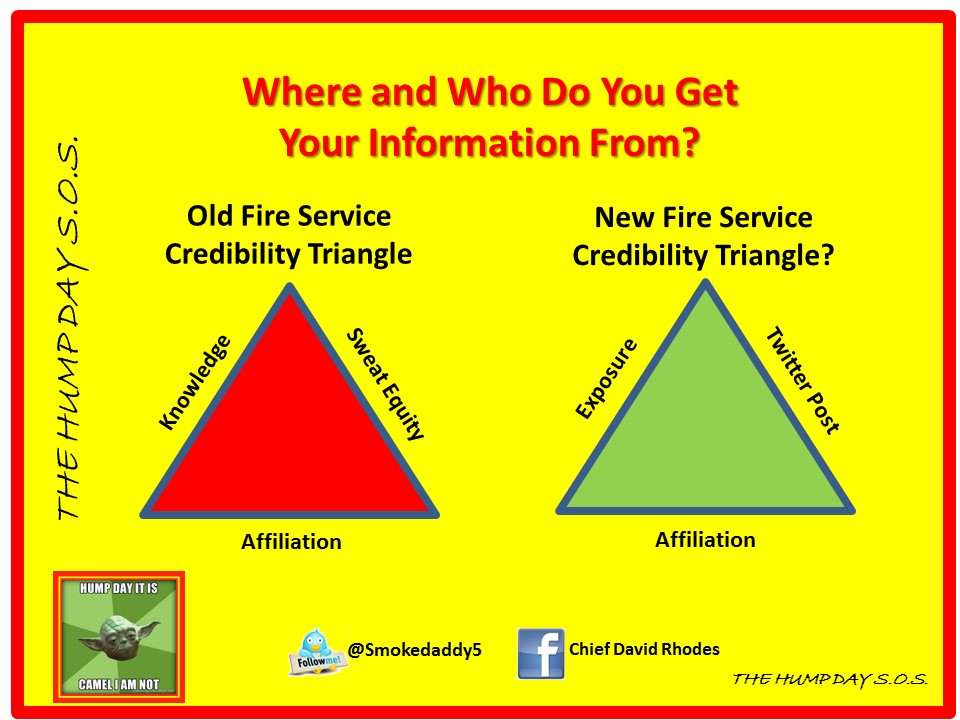 Where and Who Do You Get Your Information From?

What if the internet curtain was pulled back on everyone that publishes information for our firefighters (or anything for that matter). Just like the Wizard of Oz put on a great show for Dorothy the Cowardly Lion and the Scarecrow, the internet provides a platform for ANYONE (including me) to suddenly publish, post, distribute anything. Some approach with caution when reading but others take something as fact and just go with it. Given the speed of communication, through social media, both good and bad information travels faster than silver bullet, becomes more powerful than a locomotive………

This is a great problem to have because access to information in more plentiful than ever before. You don’t have to belong to a club or be a part of an academic society to learn just about anything. In the early days of printing many in society called for the banning of books that took a different approach or expressed a different opinion of those who were in power. Books were piled up and burned. Even libraries censored information and made choices on what books to carry and which ones to ban. This system controlled by a few limited the flow of information.

Now with the internet the flow is unrestricted and although it is a good thing, it also creates problems. The duties of censorship shift to the reader. You have to decide who is credible and who you will read, agree or disagree with and what information you will take the time to read. As a rule you should not agree with everything a person says. Surely there is a little individuality that causes you to question something that your favorite source says. If not then you are just a bobble head. On the other hand if you only read things that you totally agree with you never question yourself or learn.

What is your measure of credibility on internet information, bloggers, websites etc… Do you just agree with what they (we) say? Who are they (we)? What gives them (us) the credibility to write about a particular subject? With a magazine there is an editorial board and an editor so there is some level of vetting that takes place before something is published but this doesn’t mean that everything published is fact. With the internet and blogs however it’s just a person unrestrained or edited making a post.

I recently learned (Toto pulled the curtain back) a fire service member that contributed a great deal to one of the most popular fire service training manuals has never actually fought a fire outside of a ConEx box (metal fire training building). So does that mean that we need to question the credibility of the editors? The answer is YES. Trust but verify seems to be the way to go.

My point here is simple, don’t just grab something off the internet and run with it as fact without doing a little research on your own. Check out the credentials and street credibility of individuals before you just jump on the band wagon. There are a lot of individuals that are more interested in building a fan base and becoming popular than there are people that just want to share good information. Google hasn’t developed a filter to help us out yet so it’s up to you to do your homework. If you want to be well rounded and stay on top of your game there is a lot more to it than just Keeping up with the Kardashians! By the way, before being a firefighter I was a French model.