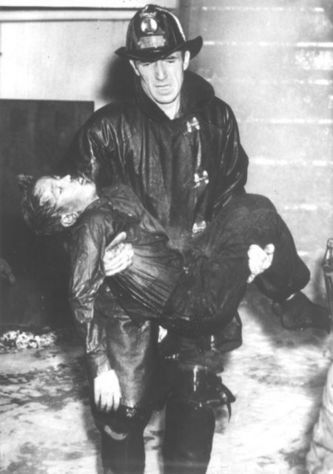 Firefighter In Iconic Our Lady Of The Angels Photo Dies


Richard Scheidt, the Chicago firefighter who cradled a lifeless boy in an iconic photograph from the 1958 fire that swept through Our Lady of the Angels School, died Monday.

“Here was a true hero,” said Bill Kugelman, former president of the Chicago firefighters union, who worked on a downtown squad with Scheidt. “Here was a true servant to the city of Chicago, a guy with heart and a guy who really did his job and lived for the fire department.”

“He was a wonderful, wonderful man,” Coughlin said. “He was very friendly, he treated anyone with respect and he was very honest.”

Scheidt, 81, was a shy man who was never comfortable being the public face of one of the city’s worst tragedies, Kugelman said.

Despite his reservations, he understood that the powerful photo, seen around the world, helped strengthen fire codes to make schools and other public buildings safer, Kugelman said.

“Who knows how many kids were saved by the laws changing?” he said.
Kugelman called Scheidt a “fireman’s fireman” whose three older brothers were also firefighters.

In the photo, which appeared in the Chicago American and Life magazine, and was shot by Steve Lasker, Scheidt is seen carrying the body of John Jajkowski from the school. John was one of 19 dead children Scheidt carried from the school. He was haunted by what he saw that day, Kugelman said.

Coughlin said her father never talked about what he saw that day, or any day he worked as a firefighter.

“That generation of people, they were really just all heroes,” she said. “They just took care of business.”

She said her father had a great sense of humor and loved to work hard, both on the job and at home.

“He just did what he did,” she said. “He had a bunch of kids, dogs, was fixing our bikes. He was just a great dad.”

Scheidt's first wife Nancy died in 1975 after 26 years of marriage. A son also preceded him in death.

He is survived by his wife of 32 years, Frances, nine children, 28 grandchildren and eight great-grandchildren. Funeral arrangements are pending.

Permalink Reply by Michael Bricault (ret) on May 24, 2009 at 11:40am
-I watched an interview with this Brother and even many, many years later he was still the embodiment of a true firefighter; humble yet proud of his calling. I have often thought that this photo should be hung anywhere firefighters are trained.
-It is pleasing to hear that our Brother lived a long life and has returned home to quarters and eternal rest.
-May his spirit and courage live on to inspire generations that remain and take their turns performing their duty holding the line.

Permalink Reply by Michael Bricault (ret) on August 13, 2009 at 3:38pm
I am sorry to see that more people have not logged on to this blog to leave comments and appreciate true fire service history in America.

Permalink Reply by Brad Hoff on August 13, 2009 at 4:56pm
It is a sad fact to see that those of us who hold near and dear to the traditons, history and brotherhood of our beloved fire service, due all we can to keep the flame lite and prevent it from being put out! We continue to be vigilant and never waivering to keep the faith that the fire inside of us never grows dim. I pray that one day, just one SPARK for all that the brotherhood stands for will re-ignite the flame of unity within those who feel the brotherhood is dying!